Drama Does the Outdoors 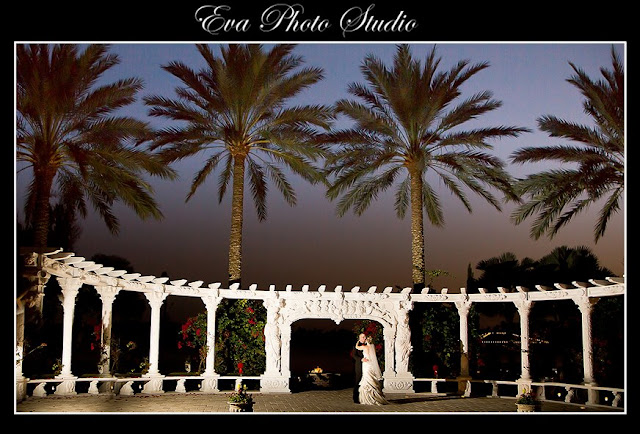 Might this be a fabulous villa along the Mediterranean?
What about a palace garden?
No, it's a fabulous lakefront estate right here in Northwest Tampa . . . the setting for Taryn and Mitch's November wedding and reception. Eva Photo Studio captured the true romance of this celebration as the two photographers followed the couple throughout the property before and after the wedding.
The home of a family friend, the Lake Alice setting included replicas of many Italian landmarks. It was easy to drift away and imagine being in faraway country that was all Taryn and Mitch's for the day. 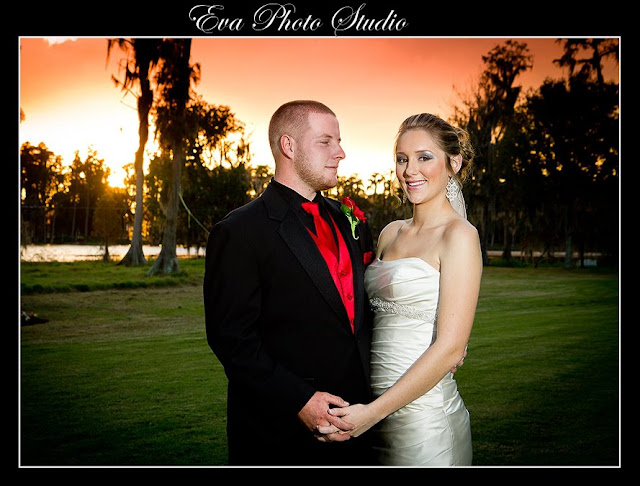 Immaculately manicured, the lawn and garden areas never gave a hint that late fall was in full swing. The wedding colors of black, platinum, and red were complimented with the blooming foliage that lined the perimeter of the estate. 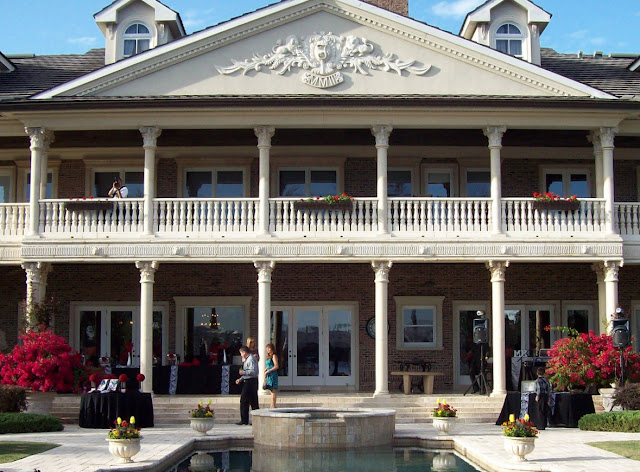 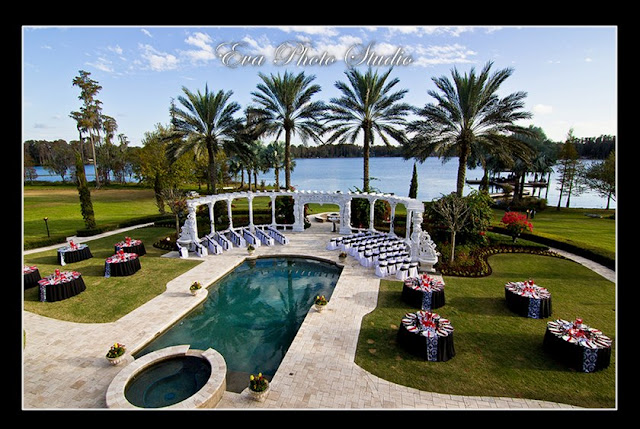 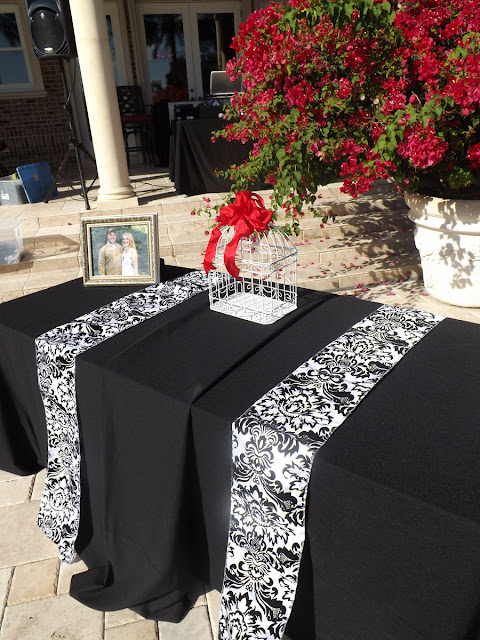 Event Designer, Kent Billier of Catering By Robert / Event Concepts, tactfully placed the signature black and white damask accents throughout tablescapes along the back patio. 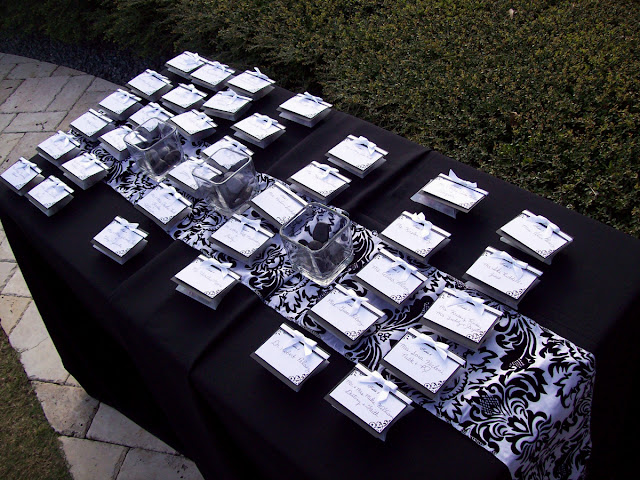 Place cards were attached to favors to keep them steady in the windy conditions. 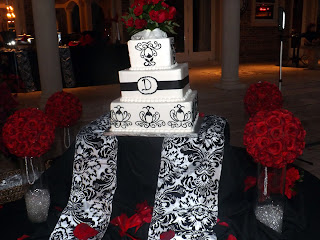 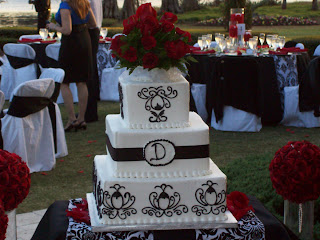 Taryn was blessed with a mom (Anita) who took her daughter's wedding dreams and made them a reality. Taryn and Mitch were true high school sweethearts. She met him through her older brother when he was in the sixth grade. They did not start dating until the 10th grade. Taryn graduated early and started pursuing a nursing career. Her mom took over much of the planning due to Taryn's hectic schedule.
She was not disappointed. Anita worked with us to build on the "glam" element through rose pomadors, varying heights of glass cylinders filled with red rose petals, and lots of bling in between. 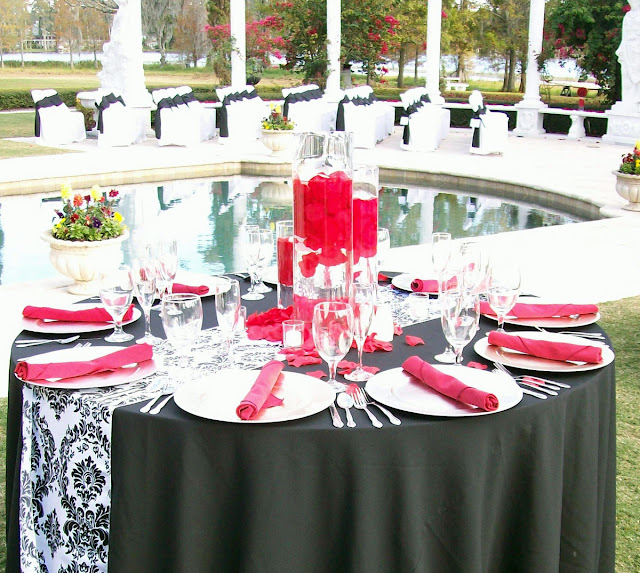 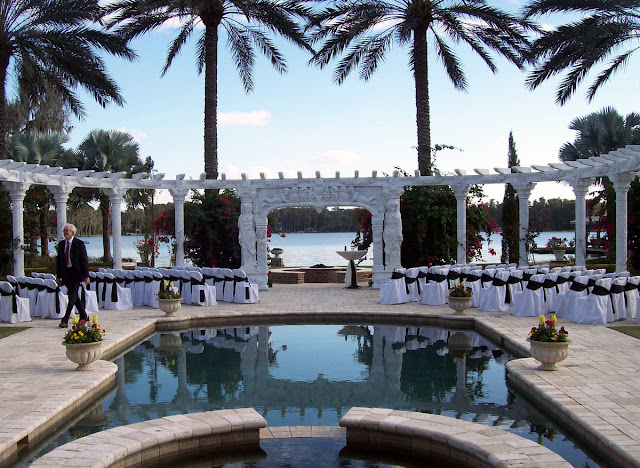 The ceremony was held at the end of the reflective pool area facing the lake. Our chairs were set up first there and then moved around the guest tables located on the adjoining lawn. Social hour was held near a built in bar area. 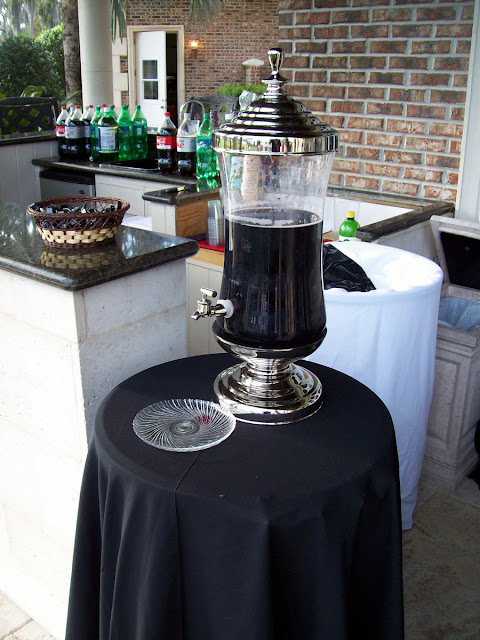 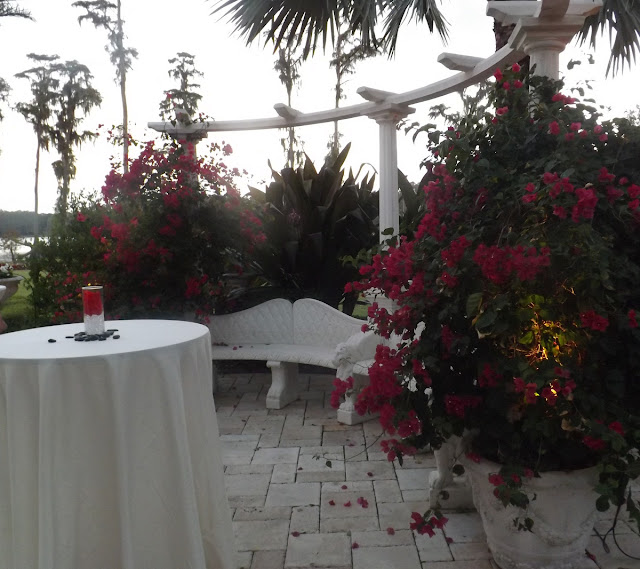 The buffet style dinner was served under the back patio area with the elevated sweetheart table nearby. 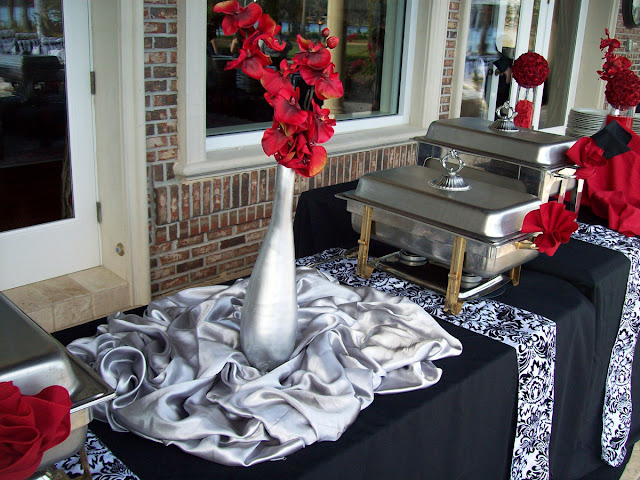 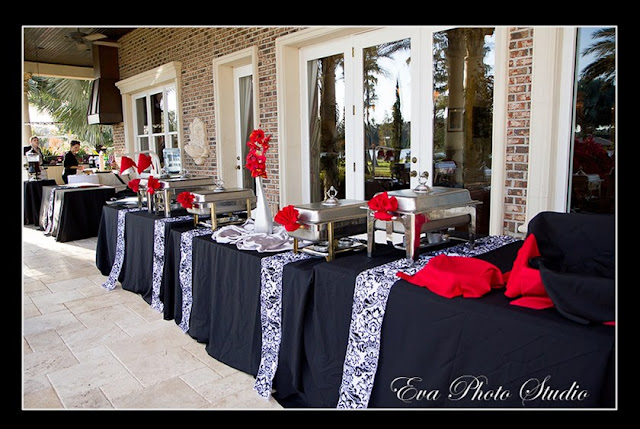 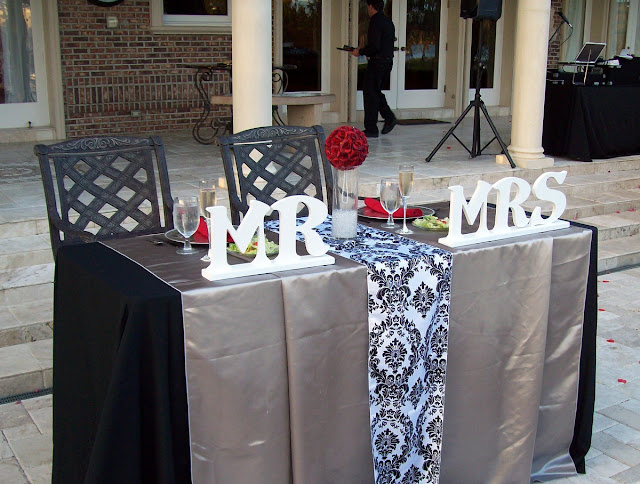 We suggested an elevated sweetheart table for Taryn and Mitch so they could easily seen along the back patio of the home. 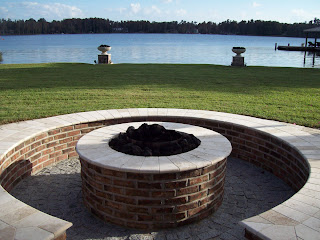 Even though it was just mid-November, a fire pit stood ready to keep guests cozy and warn on the breezy lakeside. 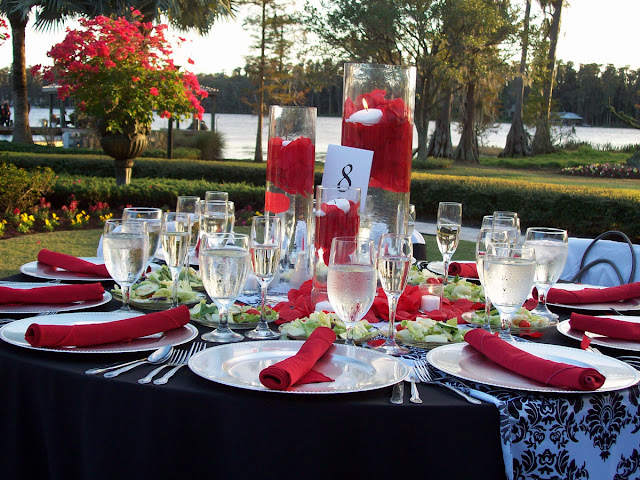 Silverware was rolled in red napkins to protect them from the elements. 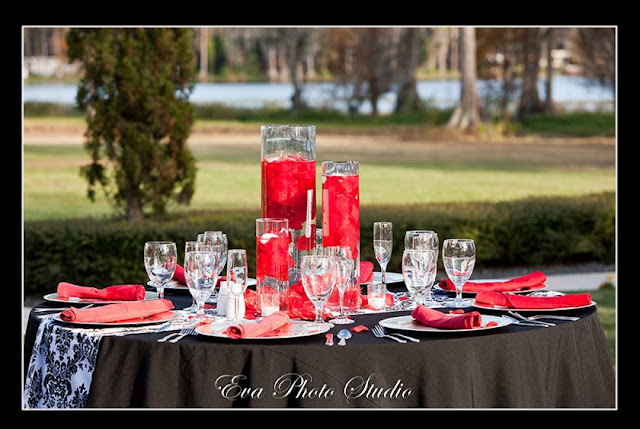 Congratulations to Taryn and Mitch on their dramatic setting for their special day. 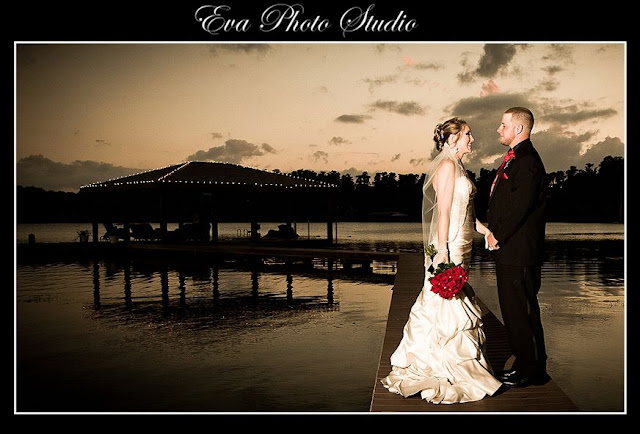 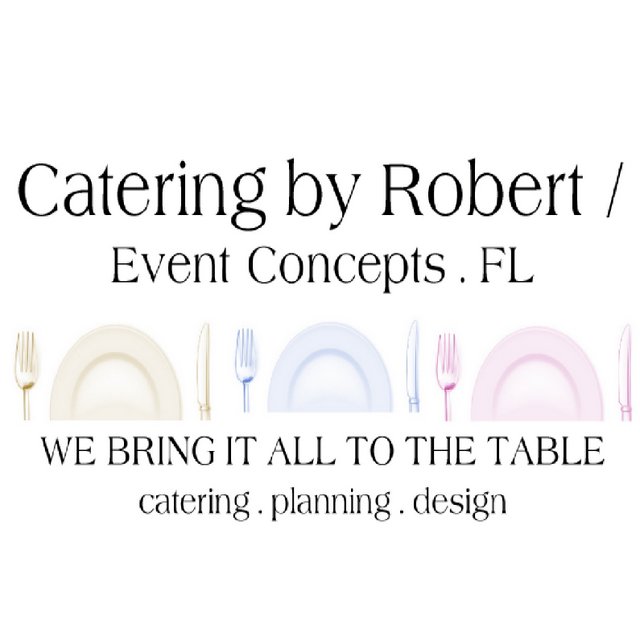 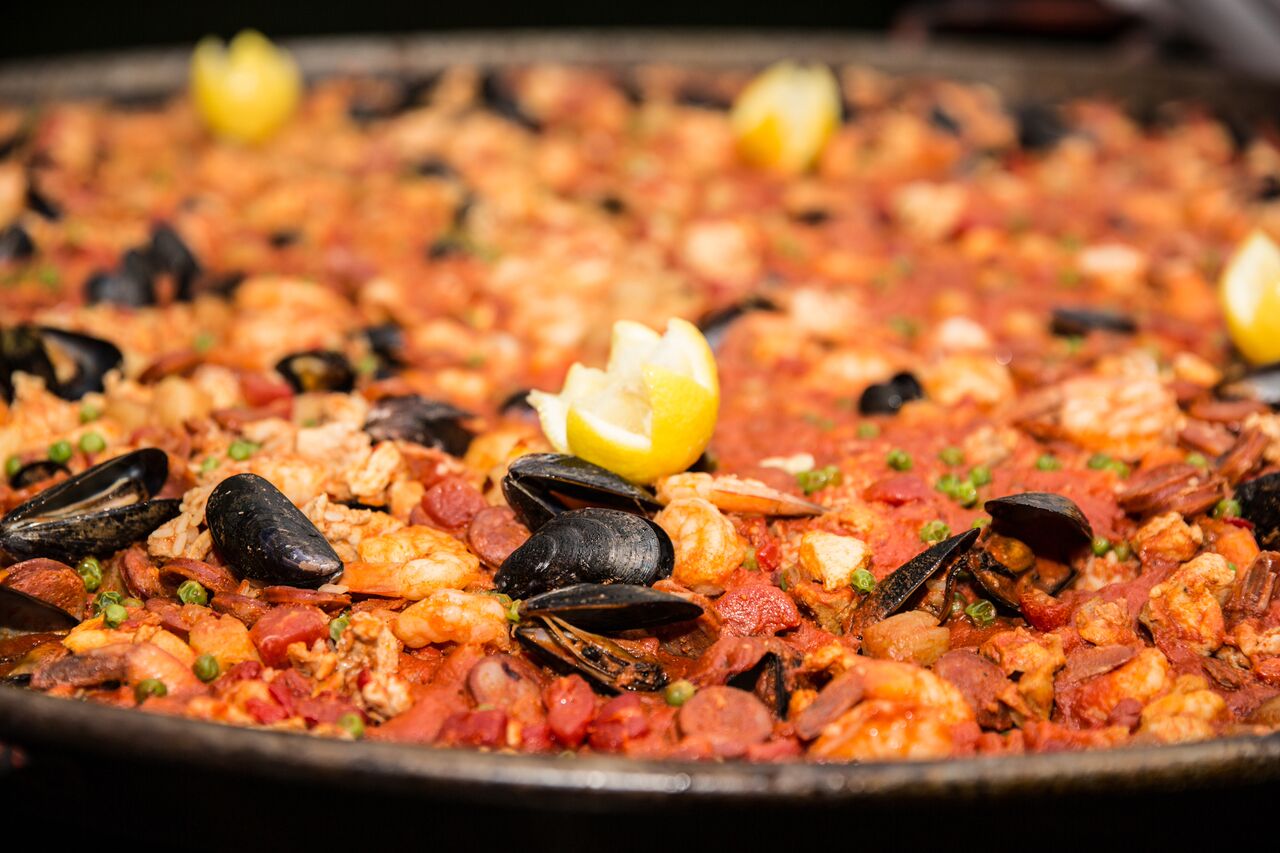